Drowsy driving plays a role in nearly eight times as many accidents as federal estimates suggest, according to a study released recently.

Everyone knows the dangers of driving while under the influence of alcohol, but many people aren’t aware of risks of drowsy driving. Considering that nearly 328,000 car accidents can be linked to drowsy driving each year in the US, it’s time to take a closer look at this growing problem and take action.

As an experienced Sacramento car accident law firm, we know how dangerous fatigued driving can be. If you or someone you love was hurt in an accident caused by a fatigued driver, contact us! You may have limited time to act, and our attorneys will fight to get you all of the compensation you deserve for your injuries.

What Happens to Your Brain When You Don’t Get Enough Sleep?

When the heavy blinks and frequent yawns start, most people push through the fatigue in favor of getting to their destination on time. As you begin to understand what happens to your brain when you’re tired, you might reconsider.

Sleep is a necessary biological function that the body cannot do without. The brain reacts by slowing down the messages it sends. Individual neurons that send the message to interpret information and cause the body to react and move in response slow down in an attempt to bring the body to a resting state.

When driving, these effects of this sleep deprivation may look like:

Sleep deprivation removes the ability to make the split-second decisions needed to prevent accidents. The brain tries to keep up, but without enough sleep, it falls behind enough to open the door to potential accidents.

Why is Driving Tired Dangerous?

The effects of drowsy driving cannot be ignored considering the serious nature of the kinds of injuries sustained during car accidents. Car accidents easily strain the ligaments and muscles in the neck and back.The force of the accident is often absorbed by the spine causing injuries like whiplash, herniated disks, and compression fractures. Even low-speed accidents can cause life-changing injuries.

Accidents and injuries bring an incredible $109 billion in societal costs. When you take into account the medical and insurance bills, first responder expenses, wages lost over the lifetime of the injured, and potential loss of life, the costs are simply too high.

Using in-vehicle camera footage of thousands of drivers who had agreed to participate in the study, the AAA Foundation for Traffic Safety concluded that motorists are falling asleep at the wheel at alarming rates.

The AAA study examined more than 700 crashes, analyzing three minutes of video of drivers’ faces leading up to the accidents. They used a scientific gauge to determine whether the driver was sleepy.

In about 9.5% of crashes, drowsiness was a factor. And it was a key factor in 10.8% of accidents that caused serious property damage.

The finding differs with the result of investigations by federal researchers, who believe sleepiness is a cause in a far smaller percentage of crashes in the U.S.

The National Highway Traffic Safety Administration (NHTSA) had reported in 2017 that driver drowsiness was involved in 1.4% of all police-reported crashes, 2 percent of crashes resulting in injuries and 2.4% that resulted in death from 2011 to 2015.

The primary reason for the disparity between government statistics and the AAA is study is likely that it’s extremely difficult for law enforcement officials to determine when drowsiness was a factor unless the driver admits it.

“Given the percentages, drowsy driving may have accounted for several thousand of the more than 37,000 American roadway deaths in 2016,” said William Horrey, group leader of the AAA Foundation for Traffic Safety’s Traffic Research Group. That’s the latest year for which figures are available.

The AAA Foundation recommends sleeping at least seven hours a night before driving.

But about 35% of U.S. drivers sleep less than that, according to the Centers for Disease Control and Prevention. Getting just four or five hours can more than quadruple the risk of an accident, according to AAA.

“Really the only effective countermeasure for drowsiness is sleep, so we want to encourage people to really try to prioritize and allocate enough time to get a good night’s rest,” Horrey said.

You know you shouldn’t be behind the wheel if you’re having trouble keeping your eyes open, drifting from your lane or having difficulty recalling the last several miles.

Slapping yourself to stay awake? That won’t work. Neither will drinking caffeine or rolling down the windows.

Those are temporary measures that fade fast, experts said.

In addition to getting enough sleep, it’s best to avoid driving at times you’d normally be sleeping. And drivers should certainly avoid medications that cause drowsiness. They should also schedule breaks.

A short nap at a rest stop can make a big difference.

“We really don’t want to be relying on our bodies to tell us that we’re fatigued,” Horrey said. “We really want to be aware and avoid it in the first place.”

Warne said another good step is to turn off digital devices at least an hour before bed to ensure a good night’s rest.

The AAA report was based on footage from the federally funded Second Strategic Highway Research Program’s Naturalistic Driving Study, which involved monitoring 3,593 drivers from six locations for several months.

How Do You Prevent Drowsy Driving?

Many drowsy driving accidents could be avoided by taking action while driving and getting better sleep. If you find yourself nodding off on the road: 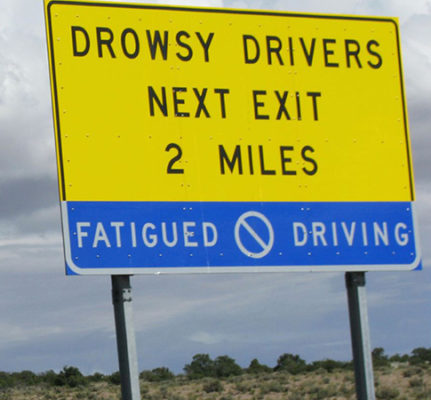 You can prevent drowsy driving before it starts by getting a full seven to eight hours of sleep. If you have trouble falling asleep:

A lumpy mattress or one that’s too hard or soft can keep you tossing and turning through the night.

A warm bath, reading a book, or gentle meditation can help your brain shut down for the day by helping establish healthy circadian rhythms.

The light from televisions, e-readers, and smartphones can be enough to send your brain the ‘awake’ signal. Try to shut things down an hour before bedtime to allow your brain to adjust.

Avoid stimulants like caffeine for at least four hours before bed. Add sleep-inducing foods to your diet like fish, chickpeas, and bananas which promote the making of melatonin, a hormone that makes you feel sleepy.

If you or a loved one has been injured in a traffic accident due to someone driving while drowsy, contact the attorneys at the Law Offices of Zappettini & Bradley for a free case evaluation today!