Typically, most of encounter two main types of drivers in the world – the drivers that become irate when they are stuck behind someone travelling slowly in the left lane, and those who have no clue that it is even a problem, or that they are far more likely to cause a car accident.

The traffic laws are clear – the left lane is to be used for turning and passing only. So what should you do if you end up stuck behind a “Sunday driver” hogging the left lane? Unfortunately, in the busy Sacramento area, you could be outta luck.

It’s pretty rare for California drivers to be cited for driving slow in the left lane. The majority of the time, drivers are going at the posted speed limit and most people around them are going a lot faster.

That may be true.

Sergeant Lonny Haschel of California Department of Public Safety (CADOT) says, while it is clear the left lane is for passing only, it is also not the fast lane.

“The left lane, contrary to what people think, is not a fast lane,” he said. “It’s in the transportation code that specifically says you need to drive your vehicle in the right lane or as close as you can to the right lane and the left lane is only for passing.”

Every state has some law on the books restricting the use of left lane.

In 29 states the law says people driving at speeds below the “normal flow of traffic” must move over into the right lane, And in California, a car on a 2-lane road with 5 or more vehicles behind it is required to pull into a designated turnout area to alleviate the jam.

Last year, Sacramento PD ticketed motorists driving slowly in the left lane for one full 24-hour period. City officials said they did it in an effort to raise awareness about the laws, and the dangers of slow-left lane driving.

If you were one of the unfortunate drivers caught in this, you probably were hit with a Class-C misdemeanor, which is like a speeding ticket, and carried a fine of up to $500!

After you pass someone, move back into the right lane once you’ve safely completed your pass. Hindering the flow of traffic by continuing to drive in the left lane is punishable by a fine of up to $200.

The fact is when drivers linger in the left lane it makes traffic congestion worse and more risky for everyone involved.

If you have slower drivers sprinkled amongst the left and right lanes, faster drivers have to repeatedly hit the brakes, and weave back and forth, changing lanes numerous times in order to pass all of them.

If a driver is moving at speeds five miles per hour slower than everyone else and traveling in the left lane, it forces faster drivers to make dangerous maneuvers, and attempt to pass them on the right – which is more likely to cause a car accident in Sacramento.

There is a better way for traffic to flow – that is if we only use the left lane for passing.

If all of the slower drivers are in the right lane, a faster driver can pass several at once, then get back over to the right. This cuts down on the total number of lane changes and eliminates the slow downs, sudden braking, and decreases the risk of accidents.

According to Jalopnik.com, in 29 states, any car that is moving slower than the surrounding speed of traffic should be in the right lane and in 10 states the laws are stricter where the left lane is reserved only for turning or passing. 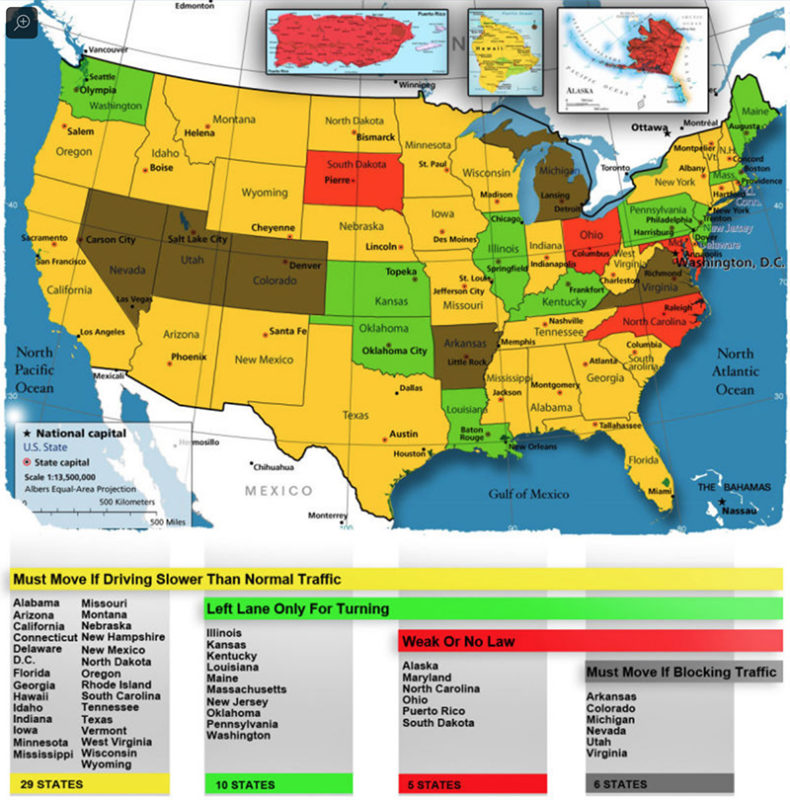 Historically, law enforcement has not paid much attention to slower left lane drivers, but recently there have been campaigns in states such as Oklahoma, Oregon, New Jersey, and Virginia where police have been issuing tickets to people they observe traveling slowly in the left lane.

Some people argue that as long as they are going the speed limit they shouldn’t be required to move over, but there is compelling evidence that shows slowing down and changing lanes is actually more dangerous than speeding.

For this reason, every state has some law on record that details the use of the left lane.

It doesn’t have to be this way.

A great example of this is the German Autobahn, which is Germany’s highway network that has long stretches of road without speed limits and has remarkably low car accident rates.

One reason for the lower accident rate, some researchers think, is that German drivers are more likely to stay in the right lane for traveling and only use the left lane for passing. This shared norm helps keep them safe.

Injured in an Accident Involving a Slow Left-Lane Driver?

If more people understand how this works, together we can have fewer traffic jams and decrease the accident rates, making our Sacramento-area roads much safer for everyone.

If you or a loved one has been injured in a traffic accident due to someone driving unsafely, contact the attorneys at The Law Offices of Zappettini & Bradley for a free case evaluation today!